This centennial symposium, features an hour of musicmaking and discussion marking 100 years since the composer’s birth. 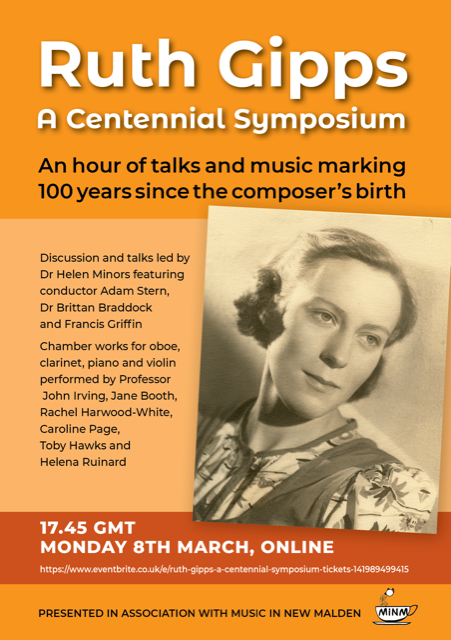 If you would like to register for this event, you may do so by clicking the following link.

In order to register, a small donation is required, anything from £1 upwards, though a donation of £10 per household is encouraged.

Ruth Gipps (1921-99) was an English composer, oboist, pianist and conductor and educator.  She was one of the most prolific compoers in Britain at the time of her death, having written five symphonies, seven concertos and numerous chamber and choral works.

In 1937 she entered the Royal College of Music where she studied oboe with Léon Goosens, piano with Arthur Alexander and composition with Gordon Jacob and later with Ralph Vaughan Williams.She was the youngest British woman to receive a doctorate in music.  She was an accomplished all-round musician, however, when she was 33 a shoulder injury ended her performance career and she decided to focus her energies on conducting and composition. Early success came when Sir Henry Wood conducted her tone poem Knight in Armour at the Last Night of the Proms in 1942.  Gipps’s music is marked by a skilful use of instrumental colour and often shows the influence of Vaughan Williams, rejecting the trends in avant-garde modern music.  In 1956 she won the Cobbett Prize of the Society of Women Musicians’s for her Clarinet Sonata.
She founded the London Repertoire Orchestra in 1955 as an opportunity for young professional musicians to become exposed to a wide range of music.  In 1957 she conducted the Pro Arte Orchestra.  She later founded the Chanticleer Orchestra in 1961, a professional ensemble which included a work by a living composer in each of its programmes, often a premiere performance.  Later she would take faculty posts at Trinity College, London (1959-1966), the Royal College of Music (1967-1977), and then Kingston Polytechnic at Gypsy HIll.  In 1967 she was appointed chairwoman of the Composers’ Guild of Great Britain.  She lived locally in Twickenham until her retirement, and moved to Sussex, living at Tickerage Castle, until her death in 1999, after suffering the effects of cancer and a stroke.