Music in New Malden is the home of  classical chamber music concerts in South West London. We offer a wide variety of repertoire (sometimes with a period-instrument focus) performed by professionals, students from the London conservatoires and local community groups.
Concerts normally happen on the second Sunday of the month at 3pm at New Malden Methodist Church (KT3 4BY). They last around one hour and are followed by tea and cake, with a chance to meet and talk to the performers.
Tickets for our Sunday afternoon concerts cost £8, and are bookable in advance via Ticketsource, or else available on the door. For our annual MusicFest summer series, tickets are £10. Join our email list (musicinnewmalden@gmail.com) to receive forthcoming concert information and the Ticketsource QR codes.We dedicate a share of box office annually to support local and national charities, as well as helping us cover fees for professional players and meet the running costs of the series. Since MiNM began back in 2009, well over £15000 has been raised for a wide variety of charities, both national and local, including Macmillan Cancer Care, Dementia UK, Home Farm Trust, Princess Alice Hospice, Disasters Emergency Committee, Jessie’s Fund and others.
To join our mailing list email: musicinnewmalden@gmail.com
Subscribe to our YouTube Channel
Twitter: @musicinNM
Instagram: @musicinnm

Music in New Malden was founded by local musicians Jane Booth and John Irving in 2009. Jane has many years’ experience playing clarinet around the world in groups such as Orchestra of the Age of Enlightenment and the Academy of Ancient Music. She leads the Coaching and Mentoring team at the Guildhall School of Music & Drama and was for many years Head of Historical Performance there. 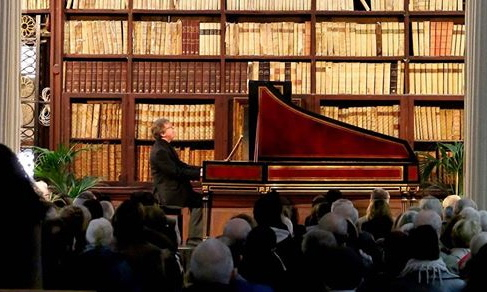 John is a performer on historical keyboards such as the fortepiano, harpsichord and clavichord. He recently retired from a distinguished academic career as Professor of Music at Bristol University, and subsequently at London University, where he was Director of the Institute of Musical Research, Trinity Laban Conservatoire of Music & Dance, London, and the Guildhall School of Music & Drama.
Jane and John’s internationally-acclaimed period-instrument group, Ensemble DeNOTE have frequently appeared at Music in New Malden and you can often hear members of the group at our concerts.
Music in New Malden is immensely grateful to New Malden Methodist Church, and especially to Peter and Alison Bullett, Robert Elves, Caroline Auty, and Alan and Doreen Downey for their support and enthusiasm for this concert series.

Processing…
Success! You're on the list.
Whoops! There was an error and we couldn't process your subscription. Please reload the page and try again.